This slow roasted duck recipe is for 2 ducks, because 1 is rarely enough. We figure 1 duck feeds 2 to 2 1/2 people max. Don’t let the carcass and giblets go to waste. We like to roast some whole garlic during one of the hours to add to a stock with the bones, water, necks, heart, kidneys, and a bunch of herbs, spices and veggies. We simmer the mixture down for at least 12 hours to get the perfect stock. We save some of the stock for a soup the next day, and we use ice cube trays to freeze the rest for when we need it in the future for cooking. We do the same with some of the duck fat (which usually doesn’t last very long in our house.)

Thanks to Hungry Mouse!

This is a VERY similar recipe to the one you’ll find on the Hungry Mouse website. We’ve used their recipe 4 times now, and we’ve tweaked it to suit our preferences. We find that 1 duck is NEVER enough food, and it can get a bit dry. Some of the noted changes are the added onions in the cavity, the garlic butter, and a different glaze. We like the passion fruit flavors that come out and give the duck a savory, unique flavor. Their glaze is good too, but we like ours better. Thank you, Mouse, for many wonderful meals!! This is primarily a protein and fat heavy dish.  Sugar content depends on the type and amount of glaze you use. Start this process 5 hours ahead of time to be safe.

Preheat the oven to 300 ℉ now. Unwrap the ducks, pull out the yummy liver and other goodies, wash the ducks under cold water. Some say to boil hot water and dump the water over the ducks to tighten the skin. We’ve done it both ways, and we don’t see the difference. Then put them on a rack, breast side up and dry them with paper towel (inside and out.) Some say to blow dry them and get as much moisture out of the skin as possible.

Place the rack over deep pan to catch the drippings and duck fat. Next rub sea salt liberally inside of the birds. Take the chopped onions and toss them in the duck cavity.

Score the skin with a sharp knife. DO NOT CUT THROUGH THE MEAT. If you do, you could end up with a dry duck (we’ve nicked the meat before without serious problems, but be careful just the same.) Slice back and forth over the breast. If there’s extra skin, slice it off and toss it in the lower pan. Tie the legs up with cooking string. Fold the wings in, tucked away under the bird. Toss it in the oven and start 2 timers. 1 timer for 3.5 hours. The other for 50 minutes.

After 50 minutes, take a small sauce pan and melt the butter over low heat. As it’s melting, use a garlic crusher, or finely mince the garlic and toss it in the butter. Let it heat up for a few minutes more. Then pull the ducks out, pour 1/2 the garlic butter over the ducks. Poke the skin with a fork or knife all over to release fat (but don’t puncture the meat!) Flip the birds, then pour the rest of the garlic butter and poke again. This should only take 10-15 minutes in total. Toss the birds back in and set the expired timer back to 1 hour. (at this point, we like to toss the duck liver in the pan from the garlic butter, simmer and eat.)
After 2nd hour: poke, flip, poke
After 3rd hour: poke, flip, poke

During the last hour of cooking, you can make the glaze. You can make the glaze earlier if you want and reheat it, but we prefer to make the glaze in the last 20 minutes of cooking. 1st, chop all the passion fruit in half and spoon the contents into a sieve over a bowl. Use the spoon to extract as much juice as possible. Discard the seeds. Chop the onions, then take a sauce pan and add all the glaze ingredients. We prefer to add the green onions close to the end of cooking, but it doesn’t matter much. For the oranges and lime, squeeze them into the sauce pan as you mix over medium heat. (this way to can see what flavor you prefer: more sweet or sour.) You might also want to add more or less siracha to taste. Let the sauce simmer, but not burn. You want the glaze to reduce down to a point where it will coat a spoon.

Remove fat and glaze
Once both timers have expired, pull the ducks out, raise the oven temp to 400 ℉, use a poultry thermometer to make sure the meat is close to or above 165 ℉, and pull the melted duck fat out of the pan. You can leave a little if you don’t want to clean a burned pan in the next step. Save the fat for cooking later! Use it in the future like you would any other oil to cook with. Then glaze the birds. Flip and glaze again. Hopefully you’ll have some glaze leftover to add to sliced and served duck. Then pop the ducks back in the oven for 10 or so minutes. You want the birds to get crispy, but not totally burned. It’s OK to let the feet get burned and a few bits and pieces to get charred. The photo in picture 5 shows how much fat we pulled from the duck. Over 2 cups!!

Measure the temp again if the ducks were less than 165 ℉ before. Take the ducks out and let them sit for 10-15 minutes. If you cut directly into them, they will lose a lot of moisture. When slicing, pull as much meat as possible off of it, and drizzle leftover glaze over the meat. Then once the meal is done, toss the carcasses in front of everyone to pick at. 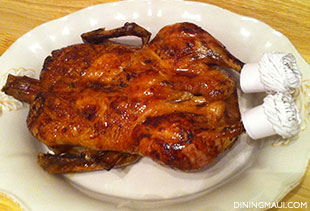